Tom McCarthy The Oscars Awarded In 2016

Thomas Joseph "Tom" McCarthy is an American film director, screenwriter, and actor who has appeared in several films, including Meet the Parents and Good Night, and Good Luck, and television series such as The Wire, Boston Public, Law & Order, and the Hallmark Hall of Fame presentation of Saint Maybe. He was born on June 7, 1966 in New Jersey, United States. McCarthy has received critical acclaim for his writing/direction work for the independent films The Station Agent (2003), The Visitor (2007), Win Win (2011), and Spotlight (2015), the latter of which won him the Academy Award for Best Original Screenplay and was nominated for the Academy Award for Best Director. McCarthy's second feature film was The Visitor, which premiered at the 2007 Toronto International Film Festival. For The Visitor, McCarthy won the 2008 Independent Spirit Award for Best Director. McCarthy appeared in the 2009 dramas The Lovely Bones and 2012. In 2010, McCarthy was nominated for an Academy Award for Best Original Screenplay for the animated film Up. He also co-wrote and directed 2011's Win Win based on his experiences as a wrestler at New Providence High School. McCarthy's most recent film, the independent drama film Spotlight, received widespread acclaim following its release in 2015. The film received 6 Academy Awards nominations, 3 Golden Globe Awards nominations, 2 Screen Actors Guild Awards nominations, and 8 Critics' Choice Movie Awards nominations. 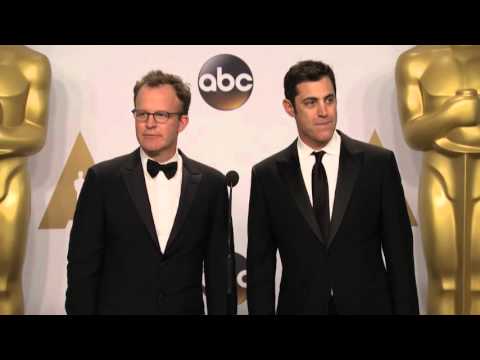