Ennio Morricone The Oscars Awarded In 2016

Ennio Morricone is an Italian composer, orchestrator, conductor, and former trumpet player. He was born on November 10, 1928 in Rome, Italy. His early musical influence came from his father, Mario, who played the trumpet for jazz, opera, and occasionally for movie scores. Morricone started composing at age six, and at age twelve he gained admission to the Santa Cecilia Conservatory in Rome. He began writing for television in 1960, and his first full film composition was for the WesternAFistful of Dollars. In 2007 he was awarded an honorary Academy Award for lifetime achievement. The Music Morricone’s success began with the 1964 score for the film A Fistful of Dollars, which launched his collaborative career with director Sergio Leone. In 2010, Tarantino originally wanted Morricone to compose the film score for Inglourious Basterds. Morricone was unable to, because the film's sped-up production schedule conflicted with his scoring of Giuseppe Tornatore's Baarìa. However, Tarantino did use eight tracks composed by Morricone in the film, with four of them included on the soundtrack. The tracks came originally from Morricone's scores for The Big Gundown (1966), Revolver (1973) and Allonsanfàn (1974).

In 2012, Morricone composed the song "Ancora Qui" with lyrics by Italian singer Elisa for Tarantino's Django Unchained, a track that appeared together with three existing music tracks composed by Morricone on the soundtrack. "Ancora Qui" was one of the contenders for an Academy Award nomination in the Best Original Song category, but eventually the song was not nominated. On 4 January 2013 Morricone presented Tarantino with a Life Achievement Award at a special ceremony being cast as a continuation of the International Rome Film Festival. In 2014, Morricone claimed that he would "never work" with Tarantino again, but later agreed to write an original film score for Tarantino's The Hateful Eight, which won an Academy Award in 2016 in the Best Original Score category. 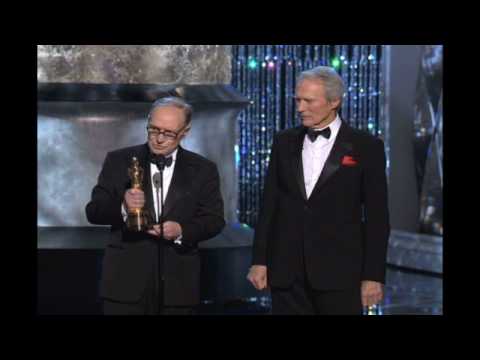