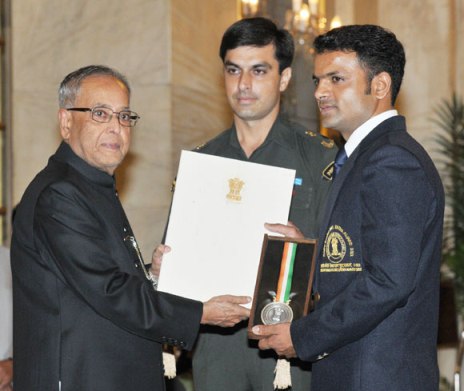 Subedar Major Vijay Kumar AVSM, SM is a sport shooter from India. He was born on 19 August 1985 in Harsour, Hamirpur, Himachal Pradesh, India. He won the silver medal in the individual 25 metre rapid fire pistol event at the 2012 Summer Olympics.Kumar hails from Barsar village of Hamirpur district of Himachal Pradesh and is a serving Subedar Major (Warrant Officer Class I) in the Dogra Regiment (16th Battalion) Indian Army.Vijay Kumar is supported by the Olympic Gold Quest initiative. He has been posted at Army Marksmanship Unit (AMU) Mhow since 2003 where he is being coached by the Russian Pavel Smirnov.He received Rajiv Gandhi Khel Ratna Award in 2012 for Shooting.