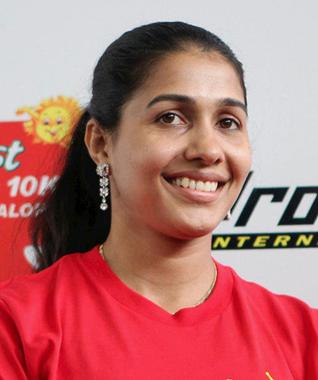 Anju Bobby George is an Indian athlete. She was born on 19 April 1977 in Changanassery, Kerala, India. She was initiated to athletics field by her father, K. T. Markose. She has been active in athletics since school days and she won the 100 m hurdles and relay in 1991-1992 school athletic meet. She finished third in 100 m hurdles and 4x100 m relay at national schools games. Then she concentrated herself to long jump event and won a medal at 1996 Delhi junior Asian championship. In 1999 Anju set the national record for triple jump in the Bangalore Federation Cup and Silver medal at the South Asian Federation Games in Nepal.

She has won Asian games in Long jump events two times. Bronze medal at 2002 Commonwealth Games at Manchester, gold medal at the Asian Games in Busan and Gold medal at Asian Athletics Championship in Incheon City of South Korea are other major achievements. She finished 6th at 2004 Olympic Games at Athens with her personal best of 6.83 m. She is hopeful that final results of Olympics may change as the winners have tested positive for steroid and Anju may be declared Bronze medal winner at Olympics, the game which she regards herself as a winner. Her bronze medal win in Long Jump at the 2003 World Championships is regarded as one of the milestones of Indian athletics. She was honoured with Arjuna award in 2002–2003, Rajiv Gandhi Khel Ratna award in 2003–2004 and was conferred Padma Shri in 2004.