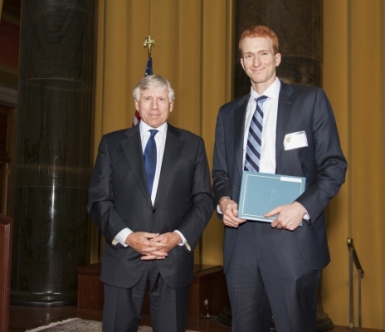 Chris Hamby's reporting on the environment and labor has been recognized with awards from the National Press Foundation, the White House Correspondents’ Association, the Society of Professional Journalists and the National Association of Science Writers, among others. He has twice been a finalist for the Livingston Award for Young Journalists, as well as a finalist for awards from Harvard University, Investigative Reporters and Editors, the Society of Environmental Journalists and the Scripps Howard Foundation. His work includes computer-assisted reporting, and he previously worked at the National Institute for Computer-Assisted Reporting’s database library. He has a master’s degree in journalism with a concentration in investigative reporting from the University of Missouri and a bachelor’s degree in journalism from the University of Richmond.

In 2010, he completed a yearlong examination of a controversial murder case, supported in part by an investigative reporting fellowship. His writing about policy, politics, the criminal justice system and public health has appeared online and in newspapers and magazines.He received 2014 Pulitzer Prize in the investigative reporting category for “Breathless and Burdened,” a series that exposed the systematic denial of benefits for coal workers with black lung disease.