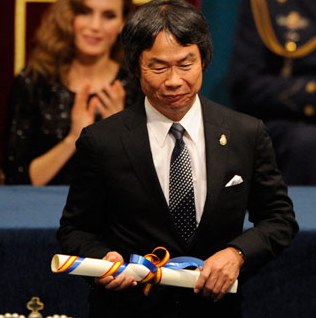 Shigeru Miyamoto (born November 16, 1952) is a Japanese video game designer and producer. He is best known as the creator of some of the best-selling, most critically acclaimed, most enduring, and most influential games and franchises of all time.Miyamoto joined Nintendo in 1977, when the company was beginning its foray into video games and starting to abandon the playing cards it had made starting in 1889. His games have been seen on every Nintendo video game console, with his earliest work appearing on arcade machines.In 2012 he won the Princess of Asturias Awards for the Communications and Humanities.