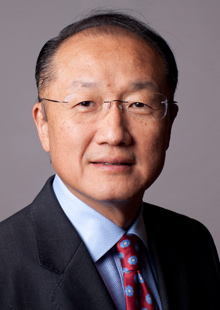 Jim Yong Kim also known as Kim Yong (born December 8, 1959), is a Korean American physician and anthropologist who has served as the 12th President of the World Bank since July 1, 2012.A global health leader, he was formerly the Chair of the Department of Global Health and Social Medicine at Harvard Medical School, and a co-founder and executive director of Partners In Health before serving as the President of Dartmouth College from 2009 to 2012, becoming the first Asian American president of an Ivy League institution.He won Prince Mahidol Award in 2013.