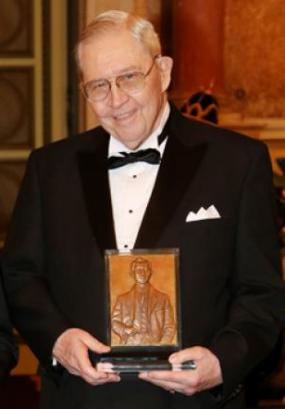 Donald Ainslie Henderson (born September 7, 1928), known as D.A. Henderson, is an American physician and epidemiologist, who headed the international effort during the 1960s to eradicate smallpox. As of 2010, he is a Distinguished Scholar at the University of Pittsburgh Medical Center's Center for Biosecurity and a professor of public health and medicine at the University of Pittsburgh. He is also a Johns Hopkins University Distinguished Service Professor and Dean Emeritus of the School of Public Health, with a joint appointment in the Department of Epidemiology.He won Prince Mahidol Award in 2014.