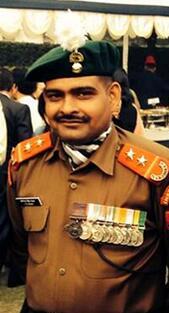 Yogendra Singh Yadav PVC is a soldier and a Junior Commissioned Officer (JCO) of the Indian army. He was awarded the highest Indian military honour, Param Vir Chakra for his actions during the Kargil War on 4 July 1999.Grenadier Yogendra Singh Yadav of the 18 Grenadiers was part of the Commando 'Ghatak' (Deadly or Lethal) Platoon tasked to capture three strategic bunkers on Tiger Hill in the early morning hours of 4 July 1999. The bunkers were situated at the top of a vertical, snow-covered, 16,500 foot high cliff face. Yadav, volunteering to lead the assault, was climbing the cliff face and fixing the ropes for further assault on the feature.

Halfway up, an enemy bunker opened up machine gun and rocket fire, killing the platoon commander and two others. In spite of having been hit by three bullets in his groin and shoulder, Yadav climbed the remaining 60 feet and reached the top. Though severely injured, he crawled to the first bunker and lobbed a grenade, killing four Pakistani soldiers and neutralizing enemy fire. This gave the rest of the platoon the opportunity to climb up the cliff face.Yadav then charged the second bunker along with two of his fellow soldiers and engaged in hand-to-hand combat, killing four Pakistani soldiers. The platoon subsequently succeeded in capturing Tiger Hill. For his sustained display of bravery, Yadav was awarded the Param Vir Chakra, India's highest medal for gallantry.