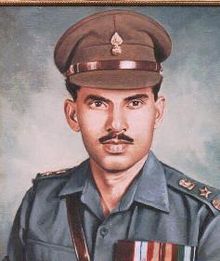 Colonel Hoshiar Singh Dahiya, PVC (5 May 1937 - 6 December 1998) was born in Sisana village, Sonipat district, Haryana to Choudhary Hira Singh. He served in the Indian Army with dedication, retiring as a Colonel. He was awarded India's highest military honor, the Param Vir Chakra. He died on 6 December 1998 of natural causes.On 15 December 1971 a battalion of the Grenadiers was given the task of establishing a bridgehead across the Basantar river in the Shakargarh Sector. Major Hoshiar Singh was commanding the left forward company and he was ordered to capture the enemy locality of Jarpal. This was a well-fortified position and was held in strength by the enemy. During the assault, his company came under intense shelling and effective crossfire from enemy medium machine guns.

Undeterred, he led the charge and captured the objective after a fierce hand-to hand fight. The enemy reacted and put in three counter attacks on 16 December 1971, two of them supported by armour, Major Hoshiar Singh unmindful of the heavy shelling and tank fire went from trench to trench, motivating his command and encouraging his men to stand fast and fight. Inspired by his courage and dauntless leadership, his company repulsed all the attacks inflicting heavy casualties on the enemy. Again, on 17 December 1971 the enemy made another attack with a battalion supported by heavy artillery fire. Though seriously wounded by enemy shelling, Major Hoshiar Singh again went from trench to trench moving about in the open with utter disregard to his personal safety when an enemy shell landed near the medium machine gun post injuring the crew and rendering it inoperative. Major Hoshiar Singh, realizing the importance of machine-gun fire, immediately rushed to the machine-gun pit and though seriously wounded himself, manned the gun inflicting heavy casualties on the enemy. The attack was successfully repulsed and the enemy retreated leaving behind 85 dead including their Commanding Officer and three other officers. Though seriously wounded, Major Hoshiar Singh refused to be evacuated till the ceasefire.Throughout this operation, Major Hoshiar Singh displayed most conspicuous gallantry, indomitable fighting spirit and leadership in the highest traditions of the Army