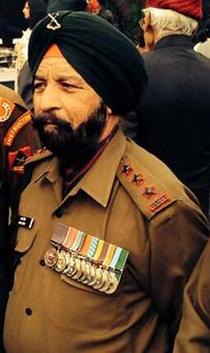 Subedar Major and Honorary Captain Bana Singh, PVC (6 January 1949) is a retired Indian soldier, and a winner of the nation's highest military award, the Param Vir Chakra. He has held the ranks Naib Subedar, Subedar Major and Honorary Captain in the Indian Army. As a Naib Subedar, he led the team which conquered the highest peak in the Siachen area as part of Operation Rajiv. The peak was named as "Bana Top" in his honour.In 1987, the strategically important Siachen area had been infiltrated by the Pakistani forces. The Pakistanis had captured an important position, which they called "Quaid post" (from Quaid-e-Azam, the title of Muhammad Ali Jinnah). The post was located at a height of 6500 metres on the highest peak in the Siachen Glacier area (the peak was later renamed to "Bana Top" by the Indians, in honour of Bana Singh). From this feature the Pakistanis could snipe at Indian army positions since the height gave a clear view of the entire Saltoro range and Siachen glacier. The enemy post was virtually an impregnable glacier fortress with ice walls, 457 metres high, on either side.

On 18 April 1987, the Pakistanis from Quaid Post fired on the Indian troops at Point Sonam (6,400 m), killing two soldiers. The Indian Army then decided to evict the Pakistanis from the Post. Naib Subedar Bana Singh was posted in Siachen on 20 April 1987, as part of the 8th JAK LI regiment, which was given the task of capturing the Quaid Post. On 29 May, a JAK LI patrol led by Second lieutenant Rajiv Pande made at an unsuccessful attempt at capturing the post, resulting in deaths of 10 Indian soldiers. After a month of preparation, the Indian Army launched a fresh operation to capture the post. This operation, called "Operation Rajiv" in honour of Rajiv Pande, was headed by Major Varinder Singh.Starting on 23 June 1987, Varinder Singh's task force launched multiple attacks to capture the post. After initial failures, the 5-member team led by Bana Singh successfully captured the Quaid post on 26 June. Bana Singh and his fellow soldiers, including Chuni Lal, climbed the steep 457 m high wall of ice. The team approached the Quaid Post from an unexpected direction, using a longer and more difficult approach than the other teams. There was a blizzard, resulting in poor visibility, which gave cover to the Indian soldiers. After reaching the top, Bana Singh found that there was a single Pakistani bunker. He lobbed a grenade into the bunker and closed the door, killing those inside. The two sides also got involved in a hand-to-hand combat, in which the Indian soldiers bayoneted some of the Pakistani soldiers outside the bunker. A few Pakistani soldiers jumped off the peak. Later, the Indians found six dead bodies of Pakistani soldiers.On 26 January 1988, Bana Singh was awarded the Param Vir Chakra, the highest wartime gallantry medal in India, for his bravery during Operation Rajiv.The peak which he captured was renamed Bana Top in his honour. At the time of the Kargil War, he was the only PVC awardee who was still serving in the Army.