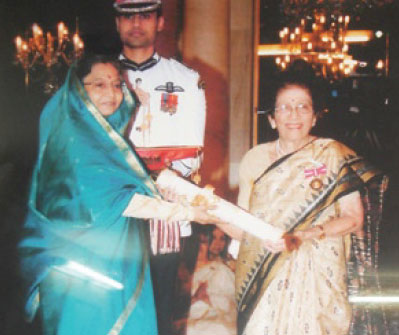 Shobhana Ranade is an Indian social worker and gandhian, known for her services towards her cause of destitute women and children. The Government of India honoured her in 2011, with the Padma Bhushan, the third highest civilian award, for her services to the society. She was born on October 26, 1924 in Pune, India. Shobhana Ranade's life was devoted to the cause of destitute women and children. Her social career took a turn, in 1955, when she went to North Lakhimpur, in Assam, joining a padyatra with Vinobha Bhave and helped setting up the Maitreyee Ashram and a Shishu Niketan, the first child welfare centre in the region. She also started the campaign, Adim Jaati Seva Sangh, a program for imparting training to Naga women on charkha weaving. In 1979, she returned to Pune and helped founding the Gandhi National Memorial Society and an institute for women for training, based at Aga Khan Palace.

In 1998, Ranade, under the aegis of the Gandhi National Memorial Society, established the Kasturba Mahila Khadi Gramodyog Vidyalaya, an institute for destitute women, for training them in 20 village trades and skills. She has also started an SOS children's village in Maharashtra, under the name, Balgram Maharashtra which has now grown to provide a home to 1600 orphans. The Hermann Gmeiner Social Centre, founded by Ranade and situated at Shivajinagar, Pune, is a children's home dedicated to the rehabilitation and education of street children, caring for 112 boys and 138 girls. Another child welfare project of Ranade was the Balgriha and Balsadan, established by Ranade at Saswad, in Pune. These centres now provide home to 60 destitute girls. She was also involved with the Save Ganga Movement, drive to save River Ganges from pollution, through Gandhi National Memorial Society.