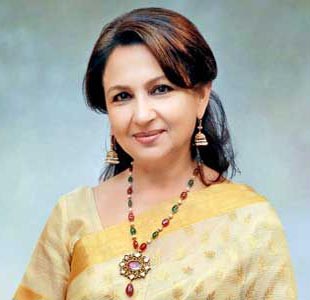 Sharmila Tagore is an Indian film actress known for her works predominantly in Hindi cinema. She has received two National Film Awards and two Filmfare Awards for her performances. She was born on 8 December 1946 in Kanpur, Uttar Pradesh, India. She led the Indian Film Censor Board from October 2004 till March 2011. In December 2005 she was chosen as an UNICEF Goodwill Ambassador.  She was one of the International Competition's Jury Members at the 2009 Cannes Film Festival. In 2013, she was awarded Padma Bhushan by the Government of India. Tagore began her career as an actress in the 1959 Satyajit Ray film Apur Sansar, as the ill-fated bride of the title character. As noted on the official website for Ray, "She was just a fourteen-year-old then, with no previous acting experience. As the shooting began, Ray had to shout instructions to Sharmila during the takes. None of this, however, is reflected on the screen. Ray cast her in his next film Devi too." She appeared in a number of Ray films, often co-starring with Soumitra Chatterjee.

She established herself as a popular Hindi film actress with Shakti Samanta's Kashmir Ki Kali in 1964. Samanta would cast her in many more hit films such as An Evening in Paris (1967), and teamed her up her with Rajesh Khanna for movies such as Aradhana (1969) and Amar Prem (1972). Other directors paired them together in Daag (1973) and Safar (1970). She starred in Gulzar's 1975 film, Mausam, and she played a supporting role as heroine Sarita Choudary's mother in Mira Nair's 1991 film Mississippi Masala.