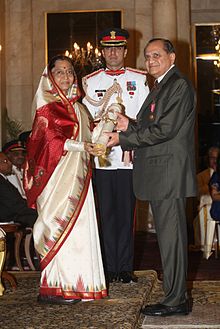 Ramdas Madhav Pai is the current Chancellor of Manipal University. He also serves as chairman of the Manipal Education and Medical Group. He was born on 17 September 1935 in Udupi, Madras Presidency British India. Dr. Ramdas Pai's leadership over the last three decades culminated in the creation of Manipal Education and Medical Group, a powerhouse in Education, Healthcare and Research. He has been instrumental in conceptualizing, articulating and implementing Manipal's Global Delivery Model of Education and has metamorphosed into the establishment of a global footprint through state-of-the-art campuses in Nepal, Malaysia, UAE and Antigua. He has been a passionate advocate of Public-Private Partnerships in higher education and healthcare. The creation of Sikkim Manipal University of Health, Medical & Technological Sciences in Gangtok, Sikkim is a striking example of PPP. The Group's Healthcare franchise has resulted into a multi-location chain of 16 hospitals with over 4000 beds across seven cities in South India.

He established the Manipal Foundation to oversee the philanthropic activities of the Group offering scholarships worth Rs. 15 crores for meritorious students, running maternal and child welfare centres for the rural population in the region, and sponsoring free heart surgeries for children from under-privileged backgrounds. Dr. Pai is the President & Chancellor of Manipal University and the Pro Chancellor of the Sikkim Manipal University. He is also the President of the renowned T.A. Pai Management Institute (TAPMI), Manipal, and the Registrar of Academy of General Education, Manipal. He is as a member of the National Integration Council (NIC), newly re-constituted by the Hon'ble Prime Minister of India. He is a member of the Courts of Banaras Hindu University, Jawaharlal Nehru University and University of Delhi. He is also a member of Round Table on Skills Development of Govt. of India. He was also chosen by Ernst & Young as the "Entrepreneur of the Year - 2004" in the services category. In 2011, he received the Padma Bhushan from the President of India Pratibha Patil for his outstanding contribution in the field of education and healthcare. He received the "Udupi Rathna in 2005 from the Udupi Utsav Committee and honoured by the Government of Karnataka in 2006 in celebration of the Suvarna Karnataka Year.