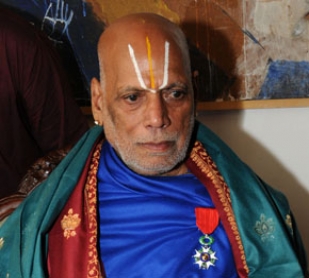 Ramanuja Tatacharya is a Sanskrit scholar from India. He received the Cavalier of Légion d'honneur. He is a researcher at the French Institute of Pondicherry. He was born on 15th April 1928 in Navalpakkam, Tamilnadu. Tatacharya has to his credit more than 15 reputed published works in classical Indian philosophical literature. His original contribution in the area may be assessed from various scholarly works like Vivriti, Balabodhini, Bhagavadgunaratnapetika, Pratyaksa Tattvacintamani Vimarsa etc. He has translated Nyayasiddhanjanam of Vedantadesika into Tamil. He has been the general editor to many scholarly works like Ramanujacaritacampu, Pancapadikavivarana with Commentaries, Caturdasalaksani etc. and he has also contributed more than 60 Research papers on different Sastras which have been published in various Research Journals.

Tatacharya has guided more than 25 Research Scholars for Ph.D. degree on different aspects of Sanskrit Literature, Philosophy, and Indian Culture. He has also guided many scholars from Foreign Countries in their Research Assignments. Tatacharya has been awarded Padma Bhushan by Government of India in year 2016.