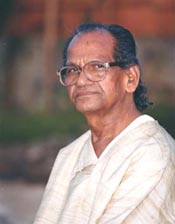 Ram Vanji Sutar is an Indian sculptor. He is the reciepient of Padma Bhushan (3rd highest civilian award) in 2016 & Padma Shri (4th highest civilian award) in year 1999 for his contribution in the field of Art. He was born on 19 February 1925 in Gondur village, Dhulia, Maharashtra India. In a childhood beset with hard struggle, the talent of this budding artist shone and  was noticed by his guruji Shri Shriram Krishna Joshi, who encouraged him to join the Sir J.J. School of Art in Bombay. The inborn talent flourished, and Ram was always first class first, bagging at the end of his course, the prestigious Mayo Gold medal for modelling. This great sculptor now in his seventies, speaks with gratefulness of his teachers under whose keen guidance he developed his drawing and clay modelling skills. Ram has mastery over stone and marble sculpting, but he delights in casting bronze and many of his most famous works are in bronze. From 1954 to 1958 Shri Ram V. Sutar served in the Department of Archaeology as a modeller for restoration work of sculptures at Ellora and Ajanta Caves where he has restored many of the sculptures.