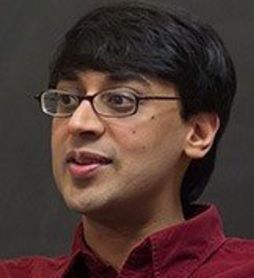 Manjul Bhargava (born 8 August 1974) is an Indian-American mathematician. He is the R. Brandon Fradd Professor of Mathematics at Princeton University, the Stieltjes Professor of Number Theory at Leiden University, and also holds Adjunct Professorships at the Tata Institute of Fundamental Research, the Indian Institute of Technology Bombay, and the University of Hyderabad. He is known primarily for his contributions to number theory.

Bhargava was awarded the Fields Medal in 2014. According to the International Mathematical Union citation, he was awarded the prize "for developing powerful new methods in the geometry of numbers, which he applied to count rings of small rank and to bound the average rank of elliptic curves." He has an Erdos number of 2.In 2015, Bhargava was awarded the Padma Bhushan, the third highest civilian award of India.