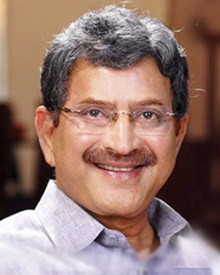 Krishna Ghattamaneni popularly known as Superstar Krishna, is an Indian film actor, writer, editor, director and producer known for his works in Telugu cinema. He has acted in more than 350 films as one of the leading actors in a career spanning over five decades. In 2008, he received an honorary doctorate from Andhra University. In 2009, the Government of India honoured him with the Padma Bhushan for his contributions to Indian Cinema. He was elected as a Member of Parliament for the Congress party in 1989. In 1997, he received the Filmfare Lifetime Achievement Award Ã?Â¢?? South. He was born on May 31, 1943 in Burripalem.

He has directed 17 feature films and produced many films under Padmalaya Film Studio, a production house owned by him. Krishna collaborated with several ace directors of the time, like Adurthi Subba Rao, V. Madhusudhana Rao, K. Viswanath, Bapu, Dasari Narayana Rao and K. Raghavendra Rao. He also has the record for number of pairings with the same actress for more than 48 films with Vijayanirmala, 47 films with Jaya Prada and 30 films with Sridevi. In December 2012, at the age of 69, Krishna announced his retirement from movies and politics. He also holds the record for having appeared for the highest no. of times in dual roles (25 times) and triple roles (7 times) on the Indian on-screen. He is credited with producing many technological firsts in the Telugu film industry, like the first Eastman color film, Eenadu (1982), the first Cinemascope film (Alluri Seetharama Raju), the first 70mm film (Simhasanam), the first DTS film (Telugu Veera Levara) (1988) and introducing cowboy and James Bond styles to the Telugu screen.