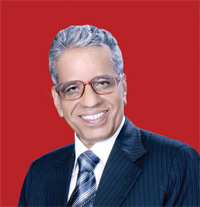 Professor Jyeshtharaj Bhalchandra Joshi is an Indian chemical engineer, nuclear scientist, consultant and teacher, widely known for his innovations in nuclear reactor designs and generally regarded as a respected teacher. He is the DAE-Homi Bhabha Chair Professor, Homi Bhabha National Institute, Mumbai, J. C. Bose Fellow of the Institute of Chemical Technology, Mumbai and is the recipient of Shantiswarup Bhatnagar Prize for Engineering Sciences and many other awards and recognitions. He received the third highest civilian honour, the Padma Bhushan, in 2014, from the President of India, for his services to the field of chemical engineering and nuclear science. He was born on May 28, 1949 in Masur, India. He obtained Bachelor and Doctorate degrees in Chemical Engineering from the University of Mumbai. He joined the faculty in 1972 in the University Department of Chemical Technology (UDCT, now ICT) and held the position of Director during 1999-2009.