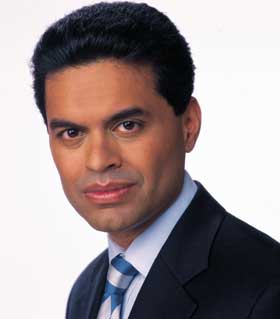 Fareed Zakaria is an Indian-born American journalist and author. He is the host of CNN's Fareed Zakaria GPS and writes a weekly column for The Washington Post. He has been a columnist for Newsweek, editor of Newsweek International, and an editor-at-large of Time. He is the author of five books, three of them international bestsellers, and the co-editor of one. He was born on January 20, 1964 in Bombay, Maharashtra, India. He completed his Bachelor of Arts from Yale University. In 1993, he earned a Doctor of Philosophy in Government from Harvard University. His dedication towards his work and creativity has taken him to the heights of fame. In 1992, he became the managing editor of Foreign Affairs when he was only 28. He also worked as the Adjunct Professor at Columbia University and taught international relations for a seminar. He became the editor of Newsweek International in October 2000. He also worked as the weekly columnist for the same. He has worked in various magazines like New York Times, the Wall Street Journal, The New Yorker and The New Republic. He has also worked as a wine columnist for Slate.

He has also appeared in various TV shows, most notably in Fareed Zakaria GPS (Global Public Square). The show premiered on CNN in June 2008. The show is one of the most popular talk show discussing international issues and has hundreds of millions of viewers. He is also a famous and influential writer. His popular books include The Post- American World and The Future of Freedom. His book The Future of Freedom defines democracy in the Western world as liberal democracy, which is the combination of participatory politics and Constitutional liberalism. He has received honorary degrees from Harvard University, Brown University, Duke University, Johns Hopkins University, the University of Miami, Oberlin College, Bates College, and the University of Oklahoma among others. In January 2010, Zakaria was given the Padma Bhushan award by the Indian government for his contribution to the field of journalism.