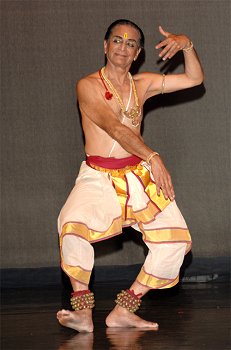 C. V. Chandrasekhar is an Indian Bharatanatyam dancers, academician, dance scholar, composer, and choreographer. He was born on 22 May 1935 in Shimla. After post-graduation, he took a Post graduate diploma in Bharatanatyam from Kalakshetra in Chennai under the mentorship of Rukmini Devi Arundale. Budulur Krishnamurthy Sastrigal and M.D. Ramanathan trained him Carnatic music. He also received training in classical dance from Karaikkal Saradambal and K.N. Dandaydhapani Pillai from Kalakshetra. He started his career in the year 1947 when classical dance forms were completely dominated by women in south India. He also worked as faculty in Banaras Hindu University and Â  M.S. University of Baroda. He retired from M.S. University of Baroda in 1992 as Head and Dean of the Faculty of Performing Arts. Apart from one of the versatile dancer and guru of the time, he is also known as a musician and choreographer. He has also conducted several research works on Indian arts. He has been invited to many international universities as well to take classes. Now, itâ??s his seventh decade in the world of art and still active. He now runs his own dance institution, Nrityashree, in Chennai. He was awarded the Sangeet Natak Akademi Award for Bharatnatyam in 1993, by the Sangeet Natak Akademi, India's National Academy of Music, Dance and Drama, and received the Kalidas Samman in 2008. In 2011, he was honoured with the Padma Bhushan by the Government of India.