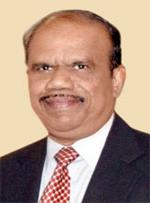 Apathukatha Sivathanu Pillai is an Indian scientist who currently serves as Honorary Distinguished Professor at Indian Space Research Organisation and a Honorary Professor at IIT Delhi in the Department of Mechanical Engineering and a Visiting Professor at Indian Institute of Science. He was born on July 15, 1947 in Nagercoil, Tamilnadu. He has completed his schooling at D.V.D. Higher Secondary School, Nagercoil. He earned his Bachelor of Electrical Engineering from University of Madras in 1969. He then completed the Advanced Management Program at Harvard Business School (Class of 1991). He then earned PhD in Technology Management from University of Pune in 1996 and D.Sc from Tumkur University. Dr. Pillai worked in ISRO and DRDO during the last four decades in Launch Vehicles and Guided Missiles. Dr. Pillai has published many papers in the international and national journals and Keynote lectures in technical conferences. Dr. Pillai has written many books including, The success mantra of BRAHMOS, Revolution in Leadership, Nano Science and Nano Technology for Engineering. He is the co – author with Dr. Kalam for the books (a) Envisioning an Empowered Nation and (b) ‘Thoughts for Change.