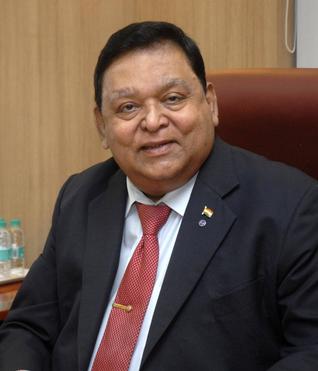 Anil Manibhai Naik is the Group Executive Chairman of Larsen & Toubro Limited, an Indian engineering conglomerate. He was awarded the Padma Bhushan, India's 3rd highest civilian award, on January 26, 2009. Naik was also the recipient of the 'Economic Times Awards-Business Leader of the Year' award, for the year 2008. He was born on June 9, 1942 in South Gujarat. Naik received his early education in Navsari. He finished a degree in mechanical engineering from the prestigious Birla Viswakarma Mahavidyalaya Engineering College in VV Nagar in Anand. In 1965, Anil. M. Naik joined Larsen & Turbo as a junior engineer and became the youngest manager in the history of the organisation. In 1985, he was made the 'General Manager' as he rose quickly through the ranks. In 1989, he took over as the Vice-President of the organisation and became the member of the Director Board. Anil M. Naik's broader perspective enabled the company to expand its horizons beyond domestic borders and reach a position which enabled it to become a global player. He restructured the company into several operating divisions and focused on improving shareholder value. The emphasis on HR and IT as twin engines of growth yielded the organization fruitful results. In 1995, Anil became the President of L&T and in 1999, took over as the 'Chief Executive Officer' and the Managing Director. In 2003, he became the Chairman and Managing Director of the organisation.

In the early nineties, Anil M. Naik came up with the idea of manufacturing engineering equipments which saw the organization treading down the manufacturing path. It began manufacturing plastic machinery, tire machinery and custom engineering products. This enabled L&T to achieve major success in the indigenization of technology and in the technology and nuclear sectors. This paid rich dividends and the turnover of the company grew fifty times in eight years. This happened when Anil M. Naik took over as the Chief Executive Officer. Under his leadership, the company expanded its horizons in the IT sector and made huge profits. Anil. M. Naik has involved himself in many social activities and is currently into the development of an educational institution set up by his father in Navsari in Gujarat. He is also associated with several educational and charitable institutions that help support the rural population of India. He is also a member of the Board of Trustees of the Indian Business Trust for HIV/AIDS.