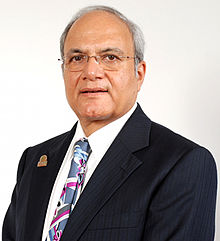 Ajay Chowdhary is one of the six founder members of HCL. A highly decorated Indian Industry icon, today he is an inspiration for young Indians. He is currently the Chairman-Board of Governors at IIT Patna. He was born on 29 August 1950 in Mount Abu, India. Ajai has been a key force in driving the growth of HCL Infosystems. The credit of setting up HCL's overseas operations, starting with Singapore in 1980 is Ajai's. During this tenure he extensively covered South Asian Markets including Malaysia, Thailand, Hong Kong, Indonesia, and the People's Republic of China, expanding business operations, which paved the way towards enhancing HCL's core competencies in bringing the best international technologies to the domestic market.

In 2011, Mr Ajai Chowdhry was conferred with the prestigious Padma Bhushan, one of the highest civilian honours, as recognition of his consistent contribution in building the IT industry of the nation. He has also received several prestigious awards including Dataquest 'IT person of the year 2007' , Electronics Man of the year by ELCINA-EFY for the year 2010, CNBC Asia Business Award 2010, India Innovator of the Year Award at the 6th edition of CNBC TV18 India Business Leader Awards 2010, Cybermedia Business ICT Award 2013 for Lifetime Achievement in ICT by Shri Narendra Modi in 2014, in August 2014, he has been awarded Honoris Causa (D.Sc.) by the Indian Institute of Information Technology, Design & Manufacturing, Jabalpur in recognition of the significant contribution he has made to the Indian IT industry and thought leadership in the field. Presently, Mr. Chowdhry is focusing on incubating entrepreneurship by aiding start-ups. He continues to give back to the society through his in-depth experience and understanding of the industry. He is currently teaching entrepreneurship at IIT Hyderabad and has also been appointed as Chairman of IIT-Patna. Mr. Ajai Chowdhry has a bachelor's degree in Electronics and Telecommunication Engineering from Jabalpur Engineering College, and attended the Executive Programme at the School of Business Administration at the University of Michigan, US.