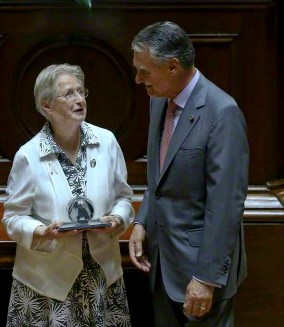 Doctor Maura Lynch is from Co. Cork. She joined MMM in 1956. After qualifying in medicine in 1964, she obtained a Diploma in Obstetrics and Gynaecology and received her first mission assignment to Angola in 1967. There she spent fifteen years in Chiulo as medical director of our hospital and school of nursing. During this time the Angolan Civil War occurred, which devastated Angola's infrastructure.Sister Maura has spent most of the past twenty-six years in Kitovu Hospital, Uganda, first as medical superintendent and obstetrician. When MMM handed over the hospital in 2000, she continued on the staff, sharing her skills as a surgeon and obstetrician. She supervised building of a twenty-eight-bed fistula unit in Kitovu, which was officially opened in April 2005. She is currently senior consultant surgeon and Director of the Obstetric Fistula Programme.She received North–South Prize in 2014.