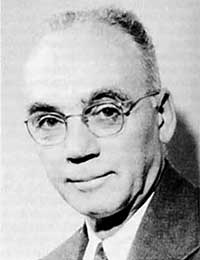 Wolfgang K. H. Panofsky was a physicist who won many awards including the National Medal of Science. Panofsky was born on April 24, 1919 in Berlin, Germany. He received his bachelor's degree from Princeton University in 1938 and earned his Ph.D. in physics from the California Institute of Technology in 1942. In April 1942 he was naturalized as a U.S. citizen. From 1945 to 1951, Panofsky held an assistant and then associate professorship at the University of California, Berkeley, before permanently establishing himself as Professor of Physics at Stanford University. Panofsky was a member of the Board of Sponsors of The Bulletin of the Atomic Scientists and won the Matteucci Medal in 1996 for his fundamental contributions to physics. He was also a recipient of the National Medal of Science, the Franklin Medal (1970), the Ernest O. Lawrence Medal, the Leo Szilard Award and the Enrico Fermi Award. He died on September 24, 2007 in California.