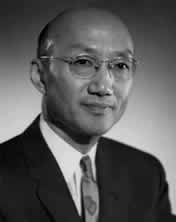 Tung-Yen Lin was a structural engineer who was the pioneer of standardizing the use of prestressed concrete. He born on November 14, 1912 in Fuzhou, China. He graduated from Tangshan College, Jiaotong University in China in 1931, before receiving a M.S. degree in Civil Engineering from the University of California at Berkeley in 1933. Since 1934, he has taught and practiced civil engineering throughout China and the United States, and has planned and designed highways, railways, and over one thousand bridges and buildings in Asia and the Americas. Lin was one of the founders of the theory and design of pre-stressed concrete structures as well as a world-renowned master in civil engineering, making creative contributions to the anti-earthquake design of long-span bridges and high-rises. In 1955, he introduced a radically simple idea for designing concrete - that a moment couple exists when concrete takes axial compression forces and pre-stressed steel takes tension. Design of pre-stressed frames, slabs and shells thereafter became standard. The firm he co-founded in 1954 pioneered designs of post-tensioned slabs. His books and technical papers dealing with pre-stressed structures, steel frameworks, bridges and building systems have been translated into many European and Asian languages.

Lin's numerous awards include the USA National Medal of Science conferred at the White House, the Consulting Engineering Award of Merit, previously received by Presidents Herbert Hoover and Dwight Eisenhower, the FIP Freyssinet Medal, the Albert Caquot Medal of the Association for Construction of France, and four honorary doctorate degrees from the US, Hong Kong, and China. He was the first member of Asian ethnicity to be elected to the USA National Academy of Engineering, and Academician of Academia Sinica, and also a foreign member of the Chinese Academy of Science.