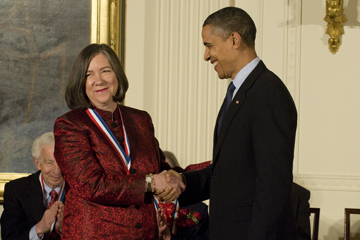 Susan Lindquist is a professor of biology at MIT specializing in molecular biology, particularly the protein folding problem within a family of molecules known as heat-shock proteins, and prions. Lindquist is a member and former Director of the Whitehead Institute and was awarded the National Medal of Science in 2010. She is also a Howard Hughes Medical Institute Investigator and Professor of Biology at Massachusetts Institute of Technology. She was born on  June 5, 1949 in Chicago, Illinois, United States. She received her Ph.D. in biology from Harvard and was a postdoctoral fellow of the American Cancer Society. She was named the Albert D. Lasker Professor of Medical Sciences in 1999 at the University of Chicago.  A pioneer in the study of protein folding, she established that protein homeostasis has profound and completely unexpected effects on normal biology and disease.

Dr. Lindquist is an elected member of the National Academy of Sciences and the Institute of Medicine. Her honors also include the Dickson Prize in Medicine, Sigma Xi William Procter Prize for Scientific Achievement, Centennial Medal of the Harvard University Graduate School of Arts and Sciences, Otto-Warburg Prize, Genetics Society of America Medal, and FASEB Excellence in Science Award.