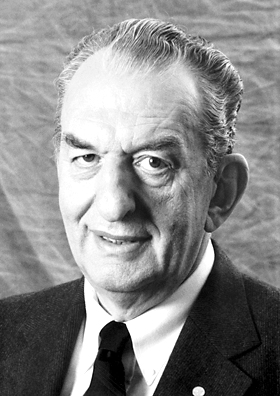 Saul Winstein was the Canadian chemist who discovered the Winstein reaction, in which he argued a non-classical cation was needed to explain the stability of the norbornyl cation. He also first proposed the concept of an intimate ion pair. Co-author of the Grunwald-Winstein equation concerning solvolysis rates. Saul Winstein was born in Montreal, Canada, October 8, 1912. He attended the University of California, Los Angeles, where he completed his work for an A.B. degree in 1934, and a M.A. degree in 1935. In 1938 he received the Ph.D. degree from the California Institute of Technology. After a postdoctoral fellowship at Caltech, he spent 1939-40 as a National Research Fellow at Harvard University associated with Professor Paul Bartlett. After a year as Instructor at the Illinois Institute of Technology in 1940-41, he returned to his alma mater, UCLA, which he served as Instructor (1941-42), Assistant Professor (1942-45), Associate Professor (1945-47), and Professor (1947 to 1969). He received the National Medal Of Science in 1970. He died on November 23, 1969 in Los Angeles, California, United States.