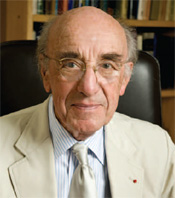 Roger Charles Louis Guillemin received the National Medal of Science in 1976, and the Nobel prize for medicinein 1977 for his work on neurohormones, sharing the prize that year with Andrew Schally , Rosalyn Sussman Yalow and David Gonzalez Barcena. Roger C. L. Guillemin was born in France on January 11, 1924 and studied at the School of Medicine in Dijon, graduating in 1949. Guillemin received his Ph.D. from the University of Montreal in 1953, and accepted an assistant professorship at Baylor University Medical School in Houston, Texas.

Guillemin proved the hypothesis that the hypothalamus releases hormones that regulate the pituitary gland. Among the hypothalamic hormones that he and his colleagues discovered, isolated, analyzed, or synthesized were TRH (thyrotropin-releasing hormone), which regulates thyroid activity; GHRH (growth hormone-releasing hormone), which causes the pituitary to release gonadotropin; and somatostatin, which regulates the activities of the pituitary gland and the pancreas. Guillemin also discovered an important class of proteins called endorphins that are involved in the perception of pain.