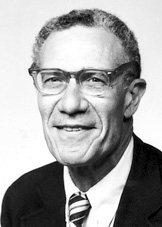 Robert Merton Solow  is an American economist. He was born in Brooklyn, New York in a Jewish family on August 23, 1924, the oldest of three children. He was well educated in the neighborhood public schools and excelled academically early in life. In September 1940, Solow went to Harvard College with a scholarship at the age of 16. At Harvard, his first studies were in sociology and anthropology as well as elementary economics. Solow's model of economic growth, often known as the Solow-Swan neo-classical growth model as the model was independently discovered by Trevor W. Swan and published in "The Economic Record" in 1956, allows the determinants of economic growth to be separated out into increases in inputs and technical progress. Using his model, Solow (1957) calculated that about four-fifths of the growth in US output per worker was attributable to technical progress. In 1999, he received the National Medal of Science.