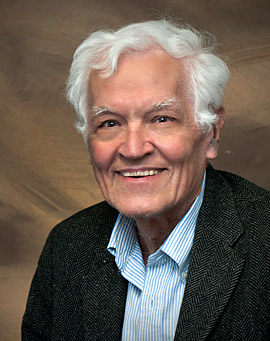 James Gilbert Glimm is an American mathematician, former president of the American Mathematical Society, and distinguished professor at Stony Brook University. He has made many contributions in the areas of pure and applied mathematics. James Glimm was born in Peoria, Illinois, USA on 24 March 1934. He received his BA in engineering from Columbia University in 1956. He continued on to graduate school at Columbia where he received his Ph.D. in mathematics in 1959. Glimm was elected to the National Academy of Sciences in 1984. In 1993, Glimm was awarded the Leroy P. Steele Prize for his contribution to solving hyperbolic systems of partial differential equations. He won the National Medal of Science in 2002 "For his original approaches and creative contribution to an array of disciplines in mathematical analysis and mathematical physics".