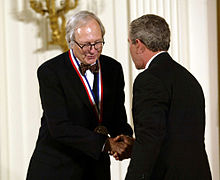 James Edwin Darnell Jr. is an American biologist who made significant contributions to RNA processing and cytokine signaling and is author of the cell biology textbook Molecular Cell Biology. He was born on September 9, 1930 in Columbus, Mississippi. Dr. Darnell received his M.D. in 1955 from the Washington University School of Medicine. His career has included research at the National Institute of Allergy and Infectious Diseases, at the Pasteur Institute in Paris, and academic appointments at the Massachusetts Institute of Technology, the Albert Einstein College of Medicine, and Columbia University. In 1974, Dr. Darnell joined Rockefeller as Vincent Astor Professor, and from 1990 to 1991 he was vice president for academic affairs. A member of the National Academy of Sciences since 1973, he has received numerous awards, including the 2012 Albany Medical Center Prize in Medicine and Biomedical Research, the 2003 National Medal of Science, the 2002 Albert Lasker Award for Special Achievement in Medical Science, the 1997 Passano Award, the 1994 Paul Janssen Prize in Advanced Biotechnology and Medicine and the 1986 Gairdner Foundation International Award.