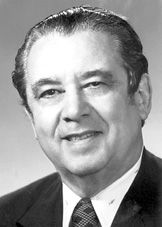 Herbert Charles Brown was an English-born American chemist and Nobel Prize in Chemistry laureate for his work with organoboranes. Herbert C. Brown was born in London, England, on May 22, 1912. Brown earned a bachelor’s degree (1936) and a doctorate (1938) from the University of Chicago. His dissertation, under the direction of Hermann Schlesinger, involved the reaction of diborane with aldehydes and ketones. It was the beginning of a lifetime’s devotion to organoborane chemistry.  Brown was the Centenary Lecturer of the Chemical Society of London in 1955 and the George Fisher Baker Non-Resident Lecturer at Cornell University in 1969. The Baker lectures formed the basis of his 1972 book, Boranes in Organic Chemistry. He was elected to the National Academy of Sciences in 1957 and the American Academy of Arts and Sciences in 1966. Brown was the recipient of the William H. Nichols Medal in 1959; the American Chemical Society Award for Creative Research in Synthetic Organic Chemistry in 1960; the Linus Pauling Medal in 1968; the National Medal of Science in 1969.