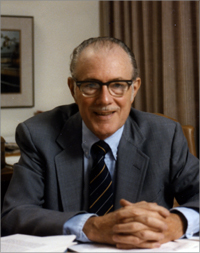 George Pake was a physicist and research executive primarily known for helping found Xerox PARC. He was born on April 1, 1924 in Kent, Ohio, United States. Pake earned his bachelor's and master's degrees from the Carnegie Institute of Technology and his doctorate in physics at Harvard University in 1948. In his first year as a faculty member, at Washington University, he published a seminal article on nuclear magnetic resonance. It became a cornerstone for research that led to what is now a widely used medical tool: modern magnetic resonance imaging, or M.R.I. In 1952, at age 28, he became chairman of the Washington University physics department. He moved to Stanford in 1956, where he taught physics for six years before returning to Washington University as provost. In 1987, he received the National Medal of Science from President Ronald Reagan.