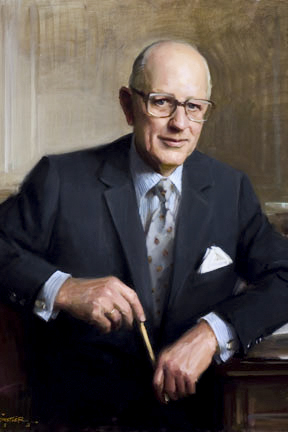 Frederick Seitz was an American physicist and a pioneer of solid state physics. Dr. Frederick Seitz was born in San Francisco, California on July 4, 1911. Seitz was a former head of Rockefeller University, a former head of the National Academy of Sciences and the principal scientific advisor to the R.J. Reynolds medical research program. He was later the Chairman Emeritus of the Board of the Institute, an organization that has long denied global warming. Seitz moved to Princeton University to study metals under Eugene Wigner,  gaining his PhD in 1934. He and Wigner pioneered one of the first quantum theories of crystals, and developed concepts in solid-state physics such as the Wigner–Seitz unit cell used in the study of crystalline material in solid-state physics. Dr. Seitz was president of the National Academy of Sciences from 1962 to 1969 and president of Rockefeller University, one of the nation’s leading research institutions, from 1968 to 1978. In 1973, President Richard M. Nixon presented him with the National Medal of Science for his contributions to the modern quantum theory of the solid state of matter. He died on March 2, 2008 in New York City, New York, United States.