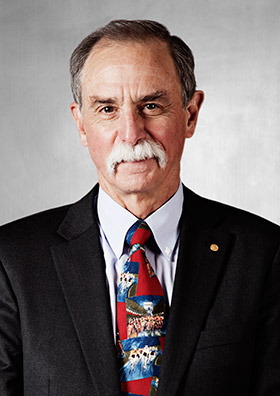 David Jeffrey Wineland is an American Nobel-laureate physicist at the National Institute of Standards and Technology (NIST) physics laboratory. His work has included advances in optics, specifically laser cooling trapped ions and using ions for quantum computing operations. He was awarded the 2012 Nobel Prize in Physics, jointly with Serge Haroche, for "ground-breaking experimental methods that enable measuring and manipulation of individual quantum systems. He was born on February 24, 1944 in Milwaukee, Wisconsin, USA" He received his bachelor's degree from the University of California, Berkeley in 1965 and his PhD in 1970, supervised by Norman Foster Ramsey, Jr. at Harvard University. Wineland was the first to laser cool ions in 1978. His NIST groups uses trapped ions in many experiments on fundamental physics, and quantum state control. They have demonstrated optical techniques to prepare ground, superposition and entangled states. This work has led to advances in spectroscopy, atomic clocks and quantum information. In 1995 he created the first single atom quantum logic gate and was the first to quantum teleport information in massive particles in 2004. Wineland implemented the most precise atomic clock using quantum logic on a single aluminum ion in 2005.

Wineland is a member of the National Academy of Sciences and has won a host of other awards, including the 2007 National Medal of Science, the 2010 Benjamin Franklin Medal in Physics, the Society of Optical and Quantum Electronics' Einstein Medal for Laser Science, the American Physical Society's Arthur L. Schawlow Prize in Laser Science, the International Award on Quantum Communications, the Optical Society of America's Frederick Ives Award, and the Presidential Rank Award for Distinguished Senior Executives and Professionals.