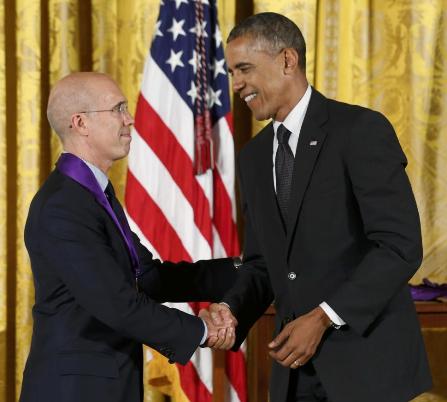 Jeffrey Katzenberg (born December 21, 1950) is an American businessman, film studio executive and film producer. As a businessman, he is the CEO of DreamWorks Animation and is also known for his tenure as chairman of The Walt Disney Studios from 1984 to 1994, during which the studio reinvigorated its live-action and animation department, as well as producing some of its biggest hits, including The Little Mermaid, Beauty and the Beast, Aladdin, and The Lion King.

As a founder and CEO of DreamWorks Animation, he has overseen the production of such animated franchises as Shrek, Madagascar, Kung Fu Panda, Monsters vs. Aliens and How to Train Your Dragon. Katzenberg has also been involved in politics. With his active support to Barack Obama, he was called as "one of Hollywood's premier political kingmakers and one of the Democratic Party's top national fundraisers."In 2014,he receives the National Medal of Arts award.