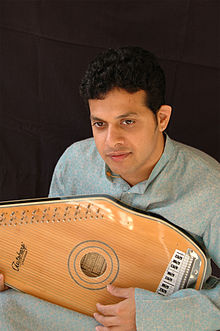 Mahesh Kale is a budding Hindustani musician of Indian origin. He originally hails from Pune and now based in San Francisco Bay Area. Apart from classical, he is verse in semi-classical, devotional and Natya sangeet. He is a popular artist of present generation and is a disciple of Pandit Jitendra Abhisheki. His mother too is a musician and a disciple of Veena Sahasrabuddhe, who taught him the first lessons of music. He has performed extensively in India, USA, Europe, UAE and South East Asia. He was honored with an award by the Akhil Bharatiya Marathi Natya Parishad (2010). He is a recipient of the prestigious Sawai Gandharva Music Festival (2011). Currently he trains hundred students in the San Francisco Bay Area. He was born on 12 January 1976 in Pune, Maharashtra, India.

He learnt first lessons of music from his mother, Meenal Kale who completed her Masters in music under the guidance of Veena Sahasrabudhe. He started taking formal lessons from his mother at the age of 6. Later he learnt music under the guidance of Purushottam Gangurde and Pandit Jitendra Abhisheki, doyen of the Agra-Jaipur Gharana. He also trained under Shounak Abhisheki. He adopted Gurukula system to study music. He pursued a degree in engineering management, yet found interest in music. While at US, he learnt Carnatic music a little bit from his south Indian roommate. He studied Digital Media engineering to recreate sounds of instruments like Sarangi and Ishraj. Mahesh has performed in over 1000 concerts of Indian Classical and Semi-Classical Vocal in India, US, UAE, UK and Southeast Asia. He has performed in Fusion concerts with famous percussionists like Sivamani and Trilok Gurtu, and instrumentalists like Pedro Eustache and Frank Martin. Recently he performed with a well known composer and saxophonist in Jazz George Brooks and groove-master bassist Kai Eckhardt. Currently Mahesh is teaching music actively to over 100 students in the San Francisco Bay Area. He has also voiced the songs sung by the character of "Sadashiv" in the movie Katyar Kaljat Ghusali which released on 12th November 2015 and was popular. He have the voice to actor/director Subodh Bhave in the film. Honored with Akhil Bharatiya Marathi Natya Parishad Award for his role in Katyar Kaljat Ghusali. Honored with the National Award for Best Singer (Male) for the film Katyar Kaljat Ghusali.