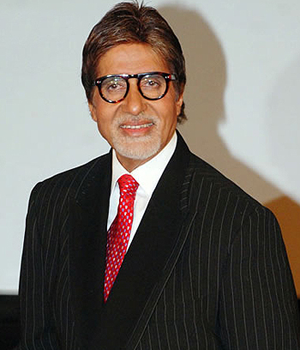 Amitabh Harivansh Bachchan is an Indian film actor. He was born on 11 October 1942 in Allahabad, United Provinces, British India. He studied at Allahabad's Jnana Prabodhini and Boys' High School, and then he went to Nainital's Sherwood College, where he majored in the art stream. He later went on to study at Kirori Mal College of the University of Delhi and completed a Bachelor of Science degree. After completing his studies at Uttar Pradesh he moved to Bombay to find work as a Film star. In film industry the producers didnt wanted to take Amitabh as they preferred a fairer skin, which he was not. But they used his voice for narrating and background commentary. He was cast in Saat Hindustani. He got a break in Bollywood after a letter of introduction from Prime Minister Mrs. Indira Gandhi, as he was a friend of her son Rajiv Gandhi. This is how he made his entry in Bollywood.

He made his first debut in 1969 as a voice narrator in film Bhuvan Shome. Then after he got his first acting role as one of the seven protagonists in Saat Hindustani. This film did not went well but gave him his first National Film Award for Best Newcomer. Then on year 1971 he was starred as supporting role in film Anand, with Rajesh Khanna which again gave him a Filmfare Best Supporting Actor Award. Then later that year he played his first negetive role in Parwaana. Then he made serveral films that year later. He narrated a part of film Bawarchi. He also made guest appearance in movie Guddi starring Jaya Bhaduri. By the early 1970s, Bachchan had garnered popularity with audiences as the "angry young man" in a series of successful Hindi feature films. His starring role in Zanjeer was particularly instrumental in launching him to stardom as an action-movie hero. Bachchan's performances in films like Laawaris, Coolie, Naseeb, Silsila, Shaarabi and Jaadugar continued to enamor fans of the tall and handsome action hero, and also landed him multiple Fanfare Awards. From the 1970s through the early '80s, the swashbuckling Bachchan appeared in more than 100 films. He seized opportunities to work with India's most acclaimed directors, such as Prakash Mehra, and dominated the silver screen with films like Trishul, Sholay and Chashme Buddoor. In addition to acting, Bachchan's roles often required him to sing. Bachchan has won numerous accolades in his career, including four National Film Awards as Best Actor and many awards at international film festivals and award ceremonies. He has won fifteen Filmfare Awards and is the most-nominated performer in any major acting category at Filmfare, with 40 nominations overall. In addition to acting, Bachchan has worked as a playback singer, film producer and television presenter. He also had a stint in politics in the 1980s. The Government of India honoured him with the Padma Shri in 1984, the Padma Bhushan in 2001 and the Padma Vibhushan in 2015 for his contributions to the arts. The Government of France honoured him with its highest civilian honour, Knight of the Legion of Honour, in 2007 for his exceptional career in the world of cinema and beyond.