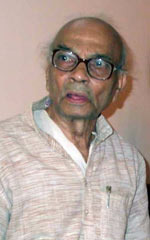 Vinda Karandikar’s full name is Govind Vinda Karandikar. He was born on August 23, 1918 in Dhalavali, Sindhudurg. Popularly known as Vinda, was the most experimental and comprehensive among all the modern Marathi poets. He was born in a poor family and due to bad financial background, he couldn’t complete his studies. But a well-wisher helped him to complete school and college education from Kolhapur. English was his subject and once he completed MA in English literature, he went to Mumbai and chose teaching as his profession. He was deeply influenced by the works of Hopkins, Browning and Elliot in those days.

Vinda Karandikar was a well-known Marathi poet, writer, essayist, literary critic and a translator. He was conferred with 39th Jnanpith Award in 2003 for his contributions to Marathi literature. He has also received Keshavasut Prize, Soviet Land Nehru Literary Award, Kabir Samman and Sahitya Akademi Fellowship in 1996. Karandikar's poetic works include Svedganga (1949), Mrudgandha (1954), Dhrupad (1959), Jatak (1968), Sanhita (1975), Adimaya (1990 and Virupika (1980). His poetic works for children include ranicha Baag (1961), Sashyacthe Kan (1963) and Pari Ga Pari (1965). He has always experimented with his ideas and works and has translated his own poem collection to English as "Vinda Poems" (1975). Modernizing old pieces of works like Dnyaneshwari and Amrutanubhawa also go to his credit. He has translated Shakespeare’s King Lear and Aristotle thoughts to Marathi. Vinda Karindikar died on 14 March 2010 at the age of 91 in Mumbai following a brief illness.