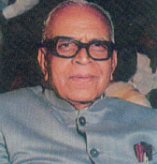 Vinayaka Krishna Gokak, popularly known as V. K. Gokak was a major writer and scholar of Kannada and English literature. He received Jnanpith Award (1990) for Kannada language for his epic Bharatha Sindhu Rashmi. He has also received Padmashree from the Government of India for Dyava Prithvi in 1961. Other noted works of V. K. Gokak include – poetry collections of Urnanaabha, Abyudaya, Baaladeguladalli, Dhyava Pruthvi and Samudra Geethegalu. He received Kannada Saahithya Academy Award for Dhyava Pruthvi. His noted novel is Samarasave Jeevana. He has done translation of Ramdhari Singh 'Dinkar's poems as Voices of the Himalaya.  He received Jnanpith award for his epic Bharatha Sindhu Rashmi. His novel Samarasave Jeevana is a part of Navodaya literature movements in Kannada.

He was born on August 9, 1909 in Savanur, Karnataka. His early education was done at his home town Savanur. He studied literature at Karnatak College Dharwar, Karnataka in the year 1929. Later he went to Oxford University and was awarded first by the University. When he returned to India in 1938, he became principal of Willingdon College, Sangli. Later he has headed many elite educational institutions of Karnataka. He was the first Vice-Chancellor of Sri Sathya Sai Institute of Higher Learning at Puttaparthi during the period 1981 - 1985. He was deeply influenced by the Kannada poet D R Bendre who mentored him during his early forays into Kannada literature. His epic Bharatha Sindhurashmi, includes 35000 lines, is notably the longest epic written in this century. Apart from Jnanpith award, this single epic work brought honorary doctorates from Karnataka University and Pacific University, USA to this scholar cum writer of Kannada language.