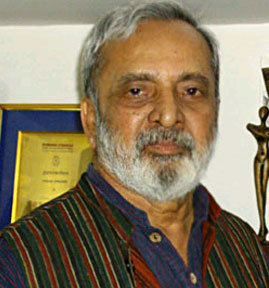 Udupi Rajagopalacharya Ananthamurthy is a contemporary writer and critic in the Kannada language and is considered as one of the pioneers of the Navya movement. He is well known among Indian authors. He is the sixth person among eight recipients of the Jnanpith Award for the Kannada language, the highest literary honor conferred in India. In 1998, he received the Padma Bhushan award from the Government of India.He was the Vice-Chancellor of Mahatma Gandhi University in Kerala during the late 1980s. Ananthamurthy was born in Melige, in Tirthahalli taluk in the Shimoga District. His education started in a traditional Sanskrit school in Doorvasapura and continued in Tirthahalli and Mysore. After receiving a Master of Arts degree from the University of Mysore Ananthamurthy went to England for further studies on a Commonwealth Scholarship. He earned his doctorate from the University of Birmingham in 1966 for his dissertation thesis entitled "Politics and Fiction in the 1930s".

Ananthamurthy's career started as a professor and instructor in 1970 in English department of University of Mysore. He was the Vice-Chancellor in Mahatma Gandhi University in Kottayam, Kerala in 1987. Ananthamurthy served as the Chairman of National Book Trust India for the year 1992. In 1993 he was elected as the president of Sahitya Academy. Ananthamurthy served as a visiting professor in many renowned Indian and foreign universities including Jawaharlal Nehru University, Eberhard Karls University of Tübingen, University of Iowa, Tufts University and Shivaji University. At present Ananthamurthy is serving as the second time chairman of the Film and Television Institute of India. Ananthamurthy's works have been translated into several Indian and European languages and have been awarded with important literary prizes. His main works include Samskara, Bhava, Bharathi Pura, and Avasthe. He has written numerous short stories as well. Several of his novels and short fictions have been made into movies.