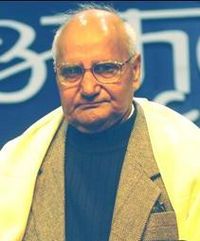 Shrilal Shukla was a Hindi writer, notable for his satire. He worked as a Provincial Civil Services (PCS) officer for the state government of Uttar Pradesh, later inducted into the IAS. He has written over 25 books, including Raag Darbari, Makaan, Sooni Ghaati Ka Sooraj, Pehla Padaav and Bisrampur Ka Sant. He was born on December 31, 1925 in Atrauli. Shukla received the Jnanpith Award, the highest Indian literary award, in 2011. His first major award was the Sahitya Akademi Award for his novel Raag Darbari in 1969. He received the Vyas Samman award in 1999 for the novel Bisrampur ka Sant. In 2008, he was awarded the Padma Bhushan by the President of India for his contribution to Indian literature and culture. On his 80th birthday in December 2005, his friends, peers, family and fans organised a literary and cultural event in New Delhi. To mark the occasion, a volume titled Shrilal Shukla – Jeevan Hi Jeevan was issued about him which contains the writings of eminent literary personalities such as Dr. Naamvar Singh, Rajendra Yadav, Ashok Bajpai, Doodhnath Singh, Nirmala Jain, Leeladhar Jagudi, Gillian Wright, Kunwar Narayan and Raghuvir Sahay among others. His friends, family and fans also contributed to the book.