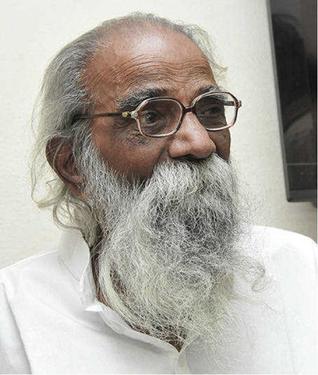 Ravuri Bharadhwaja is Telugu novelist, short-story writer, poet and critic who has been awarded Jnanpith Award in the year 2013. He is the third Telugu writer and the 48th recipient of Jnanpith, the highest honour given to writers of Indian literature. His contributions to world of literature include 37 collections of short stories, 17 novels, 4 play-lets, and 5 radio plays. He has written six short novels for children for children as well. Paakudu Raallu that tells the story behind screen of Cinema is regarded as his masterpiece. He has received honorary doctorates from Nagarjuna, Andhra and Jawaharlal Nehru Technological Universities. His greatest attribute is his flair for story-telling and hold social awareness and worth a human purpose.

Ravuri Bharadhwaja was born on 5 July 1927 in Moguluru village of Paritala Jagir of Hyderabad state, British India. Bharadwaja later moved to Tadikonda village in Guntur district. He had education till 7th standard only. Yet he became one of the top writers of Telugu literature. But his books are studied by students of BA, MA courses and researches by Phd students. That shows the depth of writings of this great writer. After Paakudu Raallu, Jeevana Samaram is regarded as his best work. He started his career as a technician during World War II, doing odd jobs as a field worker in factories. Later he joined editorial staff of ‘Zamin Rytu’, in 1946 and then ‘Deena Bandhu’, in 1948. In 1959, he joined the All India Radio, Hyderabad as a Junior Script Writer. A few of his works before his career as a junior scriptwriter are Jyothi, Yuva, Samiksha, Abhisarika, Chitraseema and Cinema.