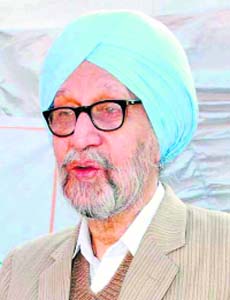 Gurdial Singh is a Punjabi writer, novelist and story-writer from Punjab, India. He was awarded Jnanpith award in the year 1999 along with Hindi writer, Nirmal Verma for his overall contributions to Punjabi literature. He started his literary career in 1957 with a short-story, Bhaganwale. In 1964, he published his first novel, Marhi Da Deeva, based on which a Punjabi film was made in the year 1989. He was born on 10 January 1933 in Bhaini Fateh (near Jaitu), British Punjab. He started his literary career in 1957 with a short story, Bhaganwale, which was published in Panj Darya, a magazine edited by Mohan Singh. His later stories were published in Preetlari, edited by Gurbaksh Singh. In 1964, his major work, Marhi Da Deeva, established him as a novelist. He has written ten novels, including Anhoe (1966), Addh Chanani Raat (1972), Anhe Ghore Da Daan (1976) and Parsa (1991); 12 collections of short stories, including Saggi Phull (1962), Kutta Te Aadmi (1971), Begana Pind (1985) and Kareer Di Dhingri (1991); and translated more than 30 books. His novels Marhi Da Deeva and Addh Chanani Raat have been translated into English as The Last Flicker and Night of the Half Moon (by Macmillan) respectively. The National Book Trust has also published an English translation of his novel Parsa. Apart from novels and short stories he has also written three plays, two prose works and nine books for children.