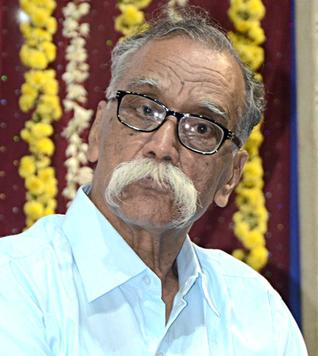 Bhalchandra Vanaji Nemade is a Marathi writer from Maharashtra, India. Famous for his books Hindu and Kosala. Also he is known for his novel Hindu jagnyachi samrudhha adgal. He is a recipient of the civilian honour of Padma Shri (2011) and the Jnanpith Award (2014).Nemade was born in 1938 in Sangavi of Khandesh, Maharashtra. He completed his bachelor's degree from Fergusson College in Pune and Master's degree in Linguistics from Deccan College in Pune. Later he took English Literature from the Mumbai University in Mumbai. He has also earned Ph.D. and D.Lit. degrees from North Maharashtra University. Then he started his career as a faculty. He taught English, Marathi, and comparative literature at different universities including the School of Oriental and African Studies at London.

His first book was Kosla, a novel written in 1963. It was a fictitious autobiographical novel of one Pandurang Sangavikar and loosely based on Nemade's youth. He used every day Marathi spoken in rural Maharashtra as narration. His other published Marathi novels are Hool, Bidhar, Jhool and Jhariya. His poetry collections are Melody and Dekhani. Teekaswayamvar, Sahityachi Bhasha, Tukaram, The Influence of English on Marathi: A Sociolinguistic and Stylistic Study and Indo-Anglian Writing are his critic works. His maiden work was translated to several Indian languages like English, Hindi, Gujarati, Kannada, Assami, Punjabi, Bengali, Urdu and Oriya. His rest published novels, Hool, Bidhar, Jhool and Jhariya was a fictional biography of Changadev Patil, done in series. As a critique, Nemade believes that short stories are of a genre inferior to novels.