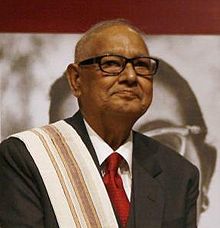 Akhlaq Mohammad Khan 'Shahryar' was an Indian academician, and a doyen of Urdu poetry in India. As a Hindi film lyricist, he is best known for his lyrics in Gaman (1978) and Umrao Jaan (1981) directed by Muzaffar Ali. He retired as the head of Urdu Department at the Aligarh Muslim University, and thereafter he remained sought after name in mushairas or poetic gatherings, and also co-edited the literary magazine Sher-o-Hikmat. He was awarded the Sahitya Akademi Award in Urdu for Khwab Ka Dar Band Hai (1987), and in 2008 he won the Jnanpith Award, the highest literary award and only the fourth Urdu poet to win the award. He has been widely acknowledged as the finest exponent of modern Urdu poetry.

Shahryar was born at Aonla, Bareilly to a Muslim Rajput family. His father Abu Mohammad Khan was posted as a Police Officer, though the family hailed from village Chaudera in Bulandshahr District, Uttar Pradesh. In his childhood days, Shahryar wanted to be an athlete but his father wanted him to join the police force. It is then that he ran away from home and was guided by Khaleel-Ur-Rehman Azmi, the eminent Urdu critic and poet. To earn a living, he started teaching Urdu fiction at Aligarh Muslim University where he later studied and got his PhD. He received his early education at Bulandshahr and later studied at Aligarh Muslim University. Shahryar started his career as a literary assistant at Anjuman Tarraqqi-e-Urdu. After that he joined Aligarh Muslim University as a lecturer in Urdu. He was appointed professor in 1986 and in 1996, he retired as chairman of the Urdu Department. He co-edited the literary magazine Sher-o-Hikmat (Poetry and Philosophy). Shahryar died on 13 February 2012 in Aligarh, Uttar Pradesh, after a prolonged illness due to lung cancer.