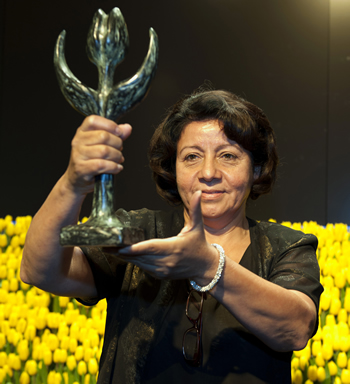 Bertha Oliva Nativí (born c. 1956) is a Honduran human rights campaigner. She is the founder and coordinator of the Committee of Relatives of the Disappeared in Honduras (COFADEH, by its Spanish initials), a non-governmental organization promoting the rights of relatives of the victims of forced disappearances between 1979 and 1989.Oliva founded the organization after her husband, Prof. Tomás Nativí, founder of the People’s Revolutionary Union (URP), was taken from his home by State forces in June 1981. She was three months pregnant at the time. Her husband has never been seen since.In November 2010, the Dutch government awarded Oliva the 2010 Human Rights Tulip award.