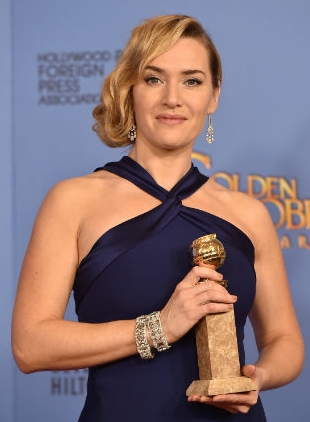 Kate Elizabeth Winslet is an English actress and singer. She is the youngest person to receive six Academy Award nominations, and is one of the few actresses to win three of the four major American entertainment awards (EGOT). In addition, she has won awards from the Screen Actors Guild, British Academy of Film and Television Arts, and the Hollywood Foreign Press Association among others, and an Honorary César Award in 2012. In 2016, she received the Golden Globe Award For Best Performance Actress in a Supporting Role in any Motion Picture. She won the Academy Award for Best Actress for her role in The Reader (2008) and the Emmy Award for Best Actress in a Miniseries for playing the title role in Mildred Pierce (2011). Winslet's greatest commercial successes since Titanic include the romantic comedy The Holiday (2006), the animated film Flushed Away (2006), and the first two films of the Divergent series.

Winslet  was Born on October 5, 1975, in Reading, England. She started acting at age 7. She starred on the British stage until the mid-1990s, when she appeared in her first film, Heavenly Creatures. In 1997 she had the lead in Titanic, which propelled her to international stardom. She has since starred in several offbeat films and has won the best actress Oscar for The Reader. In addition to acting, Winslet has narrated documentaries and children's books. She was awarded the Grammy Award for Best Spoken Word Album for Children in 2000 for narrating Listen To the Storyteller. She has also provided her vocals to soundtracks of her films, including the single "What If" from Christmas Carol: The Movie (2001).